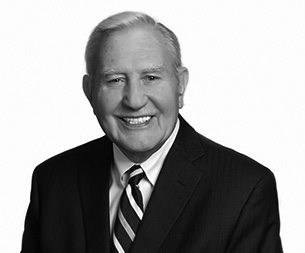 Gareth S. Aden is from Durham, N.C. and moved to Nashville with his family in the early 50s. He graduated from Vanderbilt University and received his law degree from Vanderbilt School of Law in 1969. He joined the law firm of Hooker, Keeble, Dodson and Harris after graduation and when that firm dissolved in 1986, he joined Gullett, Sanford, Robinson and Martin (GSRM) where he practices today, specializing in commercial and railroad litigation. As an attorney, he has served two terms on the board of directors of the Nashville Bar Association and was elected President of the NBA in 2000. He served as editor of the Nashville Bar Journal for several years and was the attorney for the association for four years. In 2002 he received the John C. Tune Community Service Award from the Nashville Bar Association and continues to serve the NBA as the Historical Committee chair for its Oral History Project.

Gareth is a lifelong Boy Scout. He received his Eagle Scout award as a youth and thereafter has been an adult scoutmaster and assistant scoutmaster at Troops 42 and 11 in Nashville for a period spanning 50 years. He has led scouts on high adventure backpacking trips to the Appalachian Trail, Glacier National Park, Grand Teton National Park, the White Cloud Wilderness in Idaho and the Wemineuche Wilderness in Colorado. The James T. West District of BSA has awarded him the Long Rifle Award and he has recently been selected to receive the Silver Beaver Award for service to scouting by the Middle Tennessee Scout Council. He is also active in the Episcopal Diocese of Tennessee, where he served as Vice Chancellor and Chancellor for 17 years until stepping down in 2019.

He is a member of St. David’s Episcopal Church where he served twice on the vestry and as Senior Warden and Junior Warden. He also was selected to serve as a deputy to four Triennial General conventions ofThe Episcopal Church. In the past he served as a board member and president of the Easter Seal Society of Middle Tennessee. In mid-2001 he was happy to become a trustee of the Episcopal School of Nashville and continue to serve the church in Middle Tennessee. Gareth is married to Julia Whaley Aden and they have two children, Spenser Aden and Erika Best, and four grandchildren. He is an avid backpacker, climber, cyclist, trout fisherman and gardener.