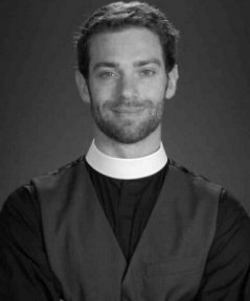 The Rev. Matthew Lewis is the Canon for Evangelism and Christian Formation at Christ Church Cathedral where he oversees newcomer ministries, Christian education, and parish life. As the son of a naval aviator, he grew up following his father’s aircraft carrier from coast to coast, living in multiple states and attending a wide variety of denominations. Since his ordination, he has worked in various Episcopal schools and parishes. He has served as the Chaplain at St. John’s Episcopal School (Salina). He also served as adjunct faculty at the Episcopal Day School (Augusta). He has worked closely with Episcopal schools for many years as a chaplain, teacher, and coach. He has coached two successful Episcopal School cross country programs. He lives a few miles from ESN in East Nashville with his wife and two dogs. Father Matthew has enjoyed volunteering with ESN’s Chapel program since the school’s first year in 2016-2017. Matthew holds a B.A. from the University of West Georgia in Philosophy and Religion (2007) and an M.Div. from Duke Divinity (2011).